Looking for something to do in Sunderland? Whether you're a local, new in town or just cruising through we've got loads of great tips and events to offer. Find out what’s on in Sunderland with our regularly updated events calendar featuring the best upcoming events in Sunderland and the area.

This guide lists events at a glance, showing what’s on each month. See the highlights of What’s On for Sunderland, featuring the best of things to do in Sunderland – Live Music and Gigs, Family Events, Art & Culture, Food & Drink and much more. Sunderland fundraisers and charity events.

Important This Event Calendar is not maintained on a daily basis and some events may have changed dates or are no longer happening. Please double-check the event websites for the most up-to-date information. 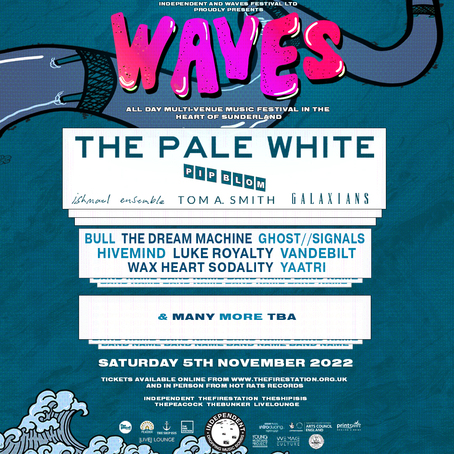 The all-day, multi-venue festival, Waves, is returning to Sunderland for its second edition this November where it will take over six venues in the heart of the city.

The festival will bring together international, national and regional artists for a day of music on 5 November, taking over Sunderland’s newest venue, The Fire Station (800 cap) as its main stage alongside five venues that were involved in its inaugural event last year: Independent, The Peacock, The Ship Isis, The Bunker and Live Lounge.

The first wave of acts features The Pale White as festival headliner at The Fire Station. Fresh from releasing their debut, critically-acclaimed album ‘Infinite Pleasure’, the band will play its only North East date of 2022, boasting a fresh new live line-up.

The Dutch indie four-piece Pip Blom returns to Independent to headline the stage following a sell out show in April while touring their second album ‘Welcome Break’ as part of the Music Venue Trust’s Revive Live tour. The Peacock will be headlined by Leeds based electronic/funk party band Galaxians. With an ever growing live reputation, the group has recently returned from a series of appearances at major UK festivals such as Bluedot and Tramlines.

Other big names on the line up include the incredible Ishmael Ensemble who continue to blur the lines between electronic and jazz music with their expansive sound. Sunderland-born Tom A Smith, who is on a meteoric rise having recently played Glastonbury for the second time and supported Elton John. And York 5-piece Bull will bring their noisey indie racket to Sunderland for the first time.

Other acts include Sunderland’s dance/pop outfit Vandebilt, the psychedelic/indie sounds of The Dream Machine, Luke Royalty, Hivemind, Yaatri, Wax Heart Sodality, Ghost//Signals as well as many more still to be announced.

Festival co-organiser Ben Richardson commented: “We can’t wait to host Waves festival again this year, there was such a great atmosphere last time out and we’re predicting it to be exactly the same this time, just on a much bigger scale. The addition of The Fire Station as main stage is a big coup and will allow us to bring bigger and better bands to Sunderland as part of the festival.”

Ben Wall from the venue Independent added: “We’re really proud of the line-up we’ve put together for this years event, it’s amazing to bring bands that have played and sold out Independent in the past (The Pale White, Pip Blom) back to the city alongside so many more exciting emerging artists that are playing here for the first time. The further announcements to come only make the day better, with loads more acts, stage takeovers and more still to be announced.”

If you have an event, that you would like to be featured on our Events Calendar, please visit Free Event Listing.